Priority: Urgent
Current State: Closed
Released In: n/a
Target Release: n/a
Applies To: Extension
Component: VotePlugin
Branches:
Reported By: IngoKappler
Waiting For:
Last Change By: MichaelDaum
Hopefully it is a documentation issue and I am just horribly missing the key. If so I commit myself to fix it ones it is clear. Here we go... Topic contains: Trying to vote will reload the page but: 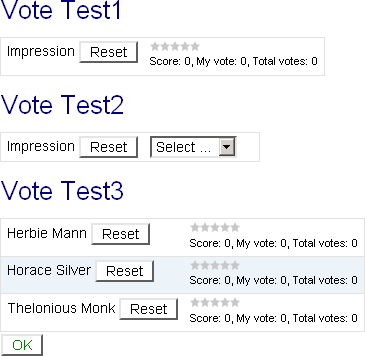 Summaries remain empty or with 0 values and stars are always gray.
The description says "...polls are saved in a secret place by default" but I couldn't figure out this place so far. So I tried using option saveto="%TOPIC%" or saveto="VotePluginTests" but it didn't change anything. -- IngoKappler - 30 Jul 2009 See related Support.Question257. For what its worth, it seems to be working fine for me using the latest version of the plugin and RatingContrib under FastCGI on 1.0.6. -- AndrewJones - 03 Sep 2009 I am using ModPerlEngineContrib as active accelerator. I plan to do some tests with FastCGI once I find a free spot for it. -- IngoKappler - 04 Sep 2009 I recently did some work with the plugin for a client, and didn't observe any such problem. However if there have been no votes, there are no results to display. This may be what you are seeing. Oh, and I found a bug in the TWiki version of the plugin too. Waiting for results of your tests, I guess. -- CrawfordCurrie - 26 Oct 2009 Yeah, I have to switch from ModPerlEngineContrib to FastCGI in order to figure out if my issue is related to ModPerlEngineContrib. When I do it, I will consider the possibility of missing to vote, though right now I don't think I missed that. -- IngoKappler - 26 Oct 2009 Any updates here? I had raised the same question here. Many teams in our organization are using this plug-in; hence, a fix will be very much appreciated. -- GuruprasadIyer - 31 Dec 2009 I don't know if my contribution will count toward the awaited feedback but I also have exactly the same problem. My configuration: -- AleksandarJelenak - 14 May 2010 I have the same problem. I tried playing with the code and have found the following. in registerVote(), it says: well, id is undefined. Changing it to "my $id = $params->{id};" fixed that. However, the main problem seems to be lines like this: None of the parameters don't seem to exist and it looks like they should just be coming from the form elements. -- SteveLin - 26 May 2010 I finally managed to retest and the issue was fixed in the meantime. Using the following test code on a 1.0.10 system also using ModPerlEngineContrib now results in 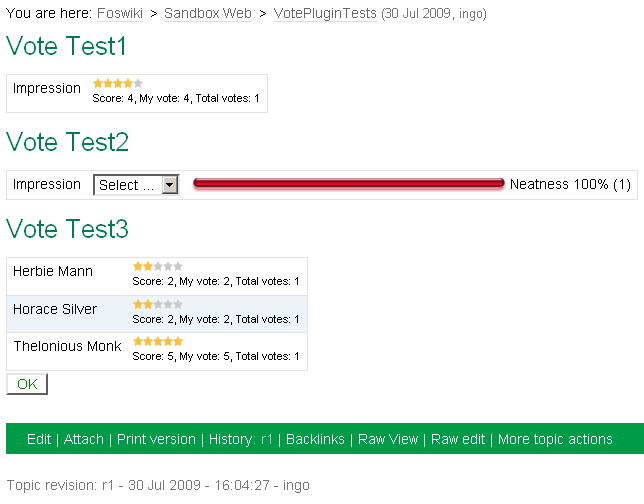 Summaries are populated as expected, results are visible.
which looks to be ok. I am closing the issue now. I don't believe I ever forgot to actually vote in the past, it's just too easy doing it. Also I recognized that the test topic which now works (see picture), is still on revision 1 which has been created on the same day on which I also opened this task. -- IngoKappler - 20 Jan 2011 I have recently migrated to Foswiki 1.1.5 under mod_perl and the plugin does not work. It does not register any votes. -- GuruprasadIyer - 07 Aug 2012 Out of the box fresh install of Foswiki 1.1.5 here with an automated install of VotePlugin from configure, no errors showing in configure. Fails to register votes or show results. Clicking "OK" on a poll refreshes the page but no votes are displayed. -- TravisBarker - 09 Sep 2012 In the parameters for the plugin please mention open="off" -- GuruprasadIyer - 02 Jul 2013 Just tested FW 2 and it's working fine -- Main.CrawfordCurrie - 11 May 2017 - 18:58 Wasn't working with FosWiki 2.1.6. Looking into the plugin, the submitted form elements aren't being picked up in the request; after a good amount of poking about it turns out to be the URL-prettifying redirect from /bin/view/Web/Topic to /Web/Topic that was banjaxing things. Adding the following to HTTPD's config sorted it: Which in context looks like Hope this helps anyone else running into this! -- BradMacpherson 15 Nov 2020 Thanks for the info! -- MichaelDaum - 16 Nov 2020