Foswiki trademark was awarded by US Patent and Trademark Office on Oct. 20, 2009. 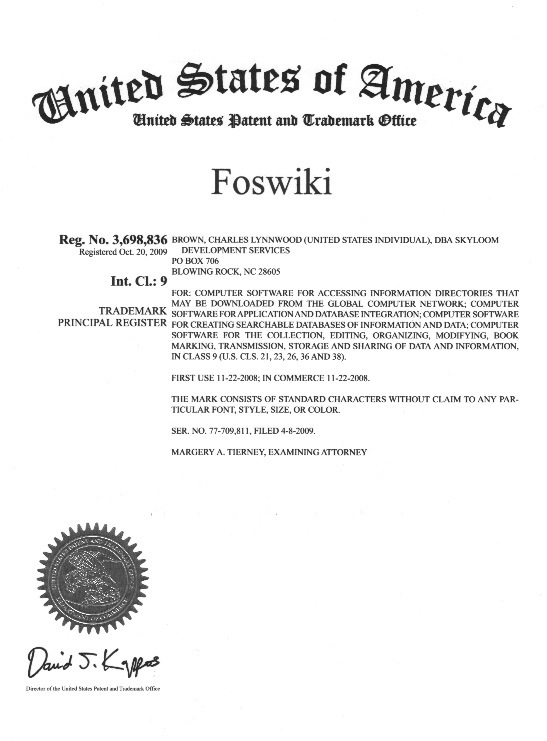 What can, and should we do with this Trademark?

Offer an perpetual, non-exclusive license to everyone

Same pros and cons as above, with the following modifications:

As this project to a large part owes its existence to the private ownership of a trademarked name, it would be great to hear what people's opinions are on the usage of our project's name. For example - is it ok with everyone that I (SvenDowideit) have registered http://foswikisupport.com and intend to run an Enterprise support business called FoswikiSupport from it? -- SvenDowideit - 16 Dec 2009 Frankly, I think you are on thin ice there. The intent of your mark is "support for Foswiki", a nominative use of the mark. But I'm concerned that it sounds more like "support provided by Foswiki". There are other similar names, such as supportforfoswiki, which would be a lot less subject to confusion, and arguably more intention-revealing. However I acknowledge that experience with (tm)wiki has made me somewhat paranoid about use of marks. I'm not a trademark lawyer, and I'd rather not have to ask one as they cost a lot of money. -- ConcernedCitizen - 16 Dec 2009 We need the trademark exactly for the reason Sven provided. In fact this is a very good example of how to protect the Foswiki trademark: by not allowing a corporate identity to take over the "Foswiki Support" market just by building up a brand that uses Foswiki in its name. Note also that Sven owns another domain that also sounds very similar to Foswiki - http://fosiki.com. I'd strongly urge you, Sven, not to use foswikisupport.com for your business plans. It reuses the Foswiki brand and trademark by integrating it in your own brand. Please be a bit more sensitive and responsible with regards to the Foswiki brand. -- MichaelDaum - 16 Dec 2009 Actually I think "fosiki" predates "foswiki" and as such, Sven could reasonably protest about "foswiki" sounding too much like "fosiki". There has to be some flexibility and spirit of cooperation, here, or we will all end up shooting eachother. -- CrawfordCurrie - 16 Dec 2009 I'll remove the off topic whinge about my fosiki brand tomorrow (yes, I registered both fosiki and foswiki as my brand in may-2008, so the entire thing predates this project) - and I very loudly declared this when we were choosing names. I'd like non-inner circle responses to this please but it reads to me like Michael may not have understood the implications of ConcernedCitizen's point : a nominative use of the mark this is a key issue that needs to be formally decided. Basically, it comes down to a choice between: I'm obviously a little more on the fence with respect to the 2 choices - but I think its important for the community to realise, that you cannot expect everyone to play nicely - so you have to choose now to either be happy to see uses you don't like, or to put your money where your mouth is. remember, this topic is for discussing and deciding the long term implementation of the Associations trademark policy - discussing my specific example should not overwhelm that long term view -- SvenDowideit - 16 Dec 2009 To the extent that the trademark registration will hopefully give foswiki some free points for protecting itself against somebody who would otherwise want to make the registration for themselves to wield it against the Foswiki community, I think it is a good idea. Beyond that I don't expect a whole lot more. As for things using the word "foswiki" in their name, that doesn't bother me too much, although such things eg. foswikisupport.com make me a little anxious - my thoughts were: "is somebody unfairly exploiting the foswiki name/brand"? If it is clearly different looking and obviously not a thing that is part of "the" foswiki.org association, that's okay I guess... Incidentally: Does a registration of a foswiki trademark mean that the FW thing is officially our logo?

-- PaulHarvey - 16 Dec 2009 If anyone else wants to build a business called "Foswiki Support" I would vote strongly against it, for the reasons stated above by Michael (sorry, Sven, nothing personal). I care less if anybody starts a business called "Wiki Experts" and advertise "We're experts in Foswiki". But that's not really the core of the issue. The issue is what are we going to do if tomorrow a company called Foswiki.NET is founded and start selling "certified Foswiki packages"? We allow it? Endorse it? Sue it? Try to enforce the trademark/copyright/GPL licence? -- RafaelAlvarez - 16 Dec 2009 mmm, Rafael, I think that your example is much more clear cut. If a company started selling "certified Foswiki packages", they would be misusing the trademark specifically because they would be intentionally creating confusion in the marketplace over what the 'real foswiki' is. and thus in that case, I think the Board would have no choice, and would have to defend the trademark to the limits of its abilities (as Lynnwood said on irc, we'd look for an experienced trademark legal firm willing to do it pro-bono - and its very likely that there would be no difficulties) What I'm looking for in this discussion, is some for a sign that we're actually able to recognise the limits of the communities trademark, and for us to draw a line, beyond which we will start legal proceedings to defend the trademark. Thus far all I can see is an emotional response to something that i beleive we (as a community) cannot actually restrict - essentially, it seems easier to bash Sven for touching a raw nerve, than to work out how we'll deal with the issue longer term. -- SvenDowideit - 16 Dec 2009 In North America, as far as I know, it's an all or nothing proposition: either an organization defends its use of the trademark against all comers or else it becomes vulnerable to trademark abandonment. Thus if the community wants to restrict usage to any entity, be it a single person consultancy or a company, it will have to be ready to pursue all possible trademark infringement cases, granting licenses to those who are approved. (Caveat: I am not a lawyer and this is not professional advice.) With respect to nominative use, although you can fairly use a trademark to describe your business, I don't believe this would entitle you to incorporate that trademark into an identifying mark of your own for your services. Whether or not this would extend to a domain name, I'm not sure. (Regarding GPL: as the whole point is that it gives others the right to distribute, it can't be used to stop a company from releasing a certified version of Foswiki, and this is why numerous open source organizations employ trademarks to keep the release of official versions in the hands of the organization.) (Regarding the question of an official logo, the Foswiki organization can choose to register as many trademarks as it likes/is willing to pay for.) -- IsaacLin - 17 Dec 2009 Let's sum up -- MichaelDaum - 17 Dec 2009 close, but not quite right:

somewhat side truths - not steps/processes

I created this topic specifically because I strongly had the feeling that many people assume that registering a trademark means there is no related context in which that trademark can be used without permission. Michael's and other people's reaction on irc seem to support this opinion. From my recollection, trademark ownership only serves to protect the holders from others causing confusion in the marketplace in the limited scope of that trademark. That means that its actually going to be difficult to restrict the creation of businesses or domains etc so long as they are not causing this confusion. (Ie, thinkpads.com does not claim to create thinkpads, nor to provide better thinkpads, twiki.com does not claim to provide a wiki, or wiki services, and so on). yes, foswikisupport.com is intended as a trivially solveable test case (because my skin in that game is only the $9.95 it cost to register it), but if you use that to avoid creating a policy that the board can act on, and one that understands the limitations of trademark law, you're not helping this project. Michael is suggesting that we can restrict the use of foswiki in any domain or business - I'm pretty sure that we can't - I think we can't restrict foswikicustomiseationservices.com or foswikiplumbing.com, and personally feel we shouldn't want to be sending out unofficial cease&desists unless there is a credible and good reason to do so. I also wonder if we have the right to restrict the registration of a domain - I think we only have a right if that domain is used in a way that contravenes our trademark. To re-re-re-iterate. The point of this topic is to start people thinking about the 2 red points , and then to write that up. I gave 2 options at the top wrt policy style - one that I think we can't do, and the other that it looks like the community isn't open to (but was given to me by someone ( tridge) whom I consider brighter and more learned than I am. So its up to you to start writing actionable policy ideas that we can vote on too. -- SvenDowideit - 17 Dec 2009 as a possibly functional example that may suit most people - http://www.drupal.com/trademark , and another simpler one at http://www.debian.org/trademark (and if that style of policy were adopted, I'd point foswikisupport.com to http://foswiki.org/Support and be happy) however, as http://drupaltrademarkpolicysucks.com/?q=node/1 asserts, I don't actually beleive that its a legally valid policy - thankfully i'm not a lawyer, and Dries did consult with quite a few.. The Software Freedom Law Center have an irc channel on freenode.. #sflc -- SvenDowideit - 17 Dec 2009 This starts getting too clouded. Let's just finish the trademark task by passing it over to the Association and move on. I don't see much value in further discussing trademarks here. -- MichaelDaum - 17 Dec 2009 huh? this task/topic is about the step after passing the tm to the association - the entire point is to work out what we do with it, and how we as an association want to portray ourselves. but then, if no-one actually cares enough to suggest or decide anything, I guess we'll end up with a dead trademark pretty quickly

We allow all businesses to make reasonable use of the Foswiki trademark. For example, if you make a CD of our Foswiki distribution, you can call that product Foswiki. If you want to use the name in some other way, you should ask us (the Foswiki Association board) first. To be fair to all businesses, we insist that no business use the name Foswiki in the name of the business, or a domain name of the business.

Copyright (c) 2010 Software in the Public Interest This logo or a modified version may be used by anyone to refer to the Foswiki project, but does not indicate endorsement by the project. Note: we would appreciate that you make the image a link to http://foswiki.org/ if you use it on a web page.

These terms seem to have worked quite well for Debian. -- CrawfordCurrie - 18 Jan 2010 And those two paragraph basically sums up all we need. Just to be clear in one point: Foswiki.NET could not exist, but We-Build-Great-Wikis.NET could, and they can make a business selling "Certified and fully tested Foswiki packages" but not "THE Certified Foswiki package" or "Official Foswiki Packages". -- RafaelAlvarez - 19 Jan 2010 It is important to note that one reason that this policy works, is because Debian has delegated the responsibility for chasing trademark infringement to SPI - in my opinion, we should do the same (presumably there is an EU equivalent organisation which we can talk to). -- SvenDowideit - 21 Jan 2010 There's nothing I can see in the SPI charter that would prevent it working with an EU-based association. It would be worthwhile contacting the SPI to find out whether this is the case. -- CrawfordCurrie - 21 Jan 2010